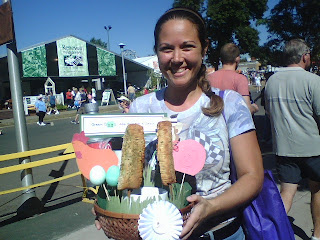 I first made Green Eggs and Ham for a state fair contest in 2008. It was a Canola Oil contest and the idea was to create something that could be fried on a stick. I came up with this recipe and it was the last contest I entered that year. I decided to stick around the fair and wait for the announcement of the winners. They announced the third place winner and it was Alice “Suefurt of St. Paul.” I sat there stunned and then they kept announcing my name and I finally I said, “That’s me, its pronounced, “Soyfurt.” My Father-in-law would’ve been proud! So I won third place and it was so much fun! TCL wanted me to do a breakfast item for my first appearance as the TCL Kitchen Star. I’ve modified the recipe so its easy to make at home and you don’t need to fry it on a stick! This is a great entree for a potluck brunch or for your family if you are having a silly day and staying in your pjs!

Click here to watch the March 12, 2010 episode of TCL when I made this recipe.

Spread pizza crust dough on a large cookie sheet (shape into large square). Bake in oven for 7 minutes. Set aside.

Spread pesto on cooked pizza crust, and then add eggs and bacon. Sprinkle cheese on top of pizza.

Slice pizza into 16 pieces and serve with maple syrup.