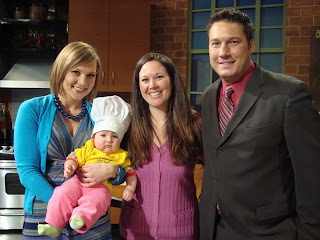 When I first told Will I was entering the Twin Cities Live competition, there was a lot of grumbling. “I have to tape you? Huh? What are you entering?” Will is my right-hand man through the state fair competitions so he knew this would involve a large investment-primarily of time-mine and his. I simply told Will it was a cooking contest and the prize was $2,000 in groceries from Cub. What did we have to lose? He agreed, taped me making party peppers and the rest is history. Well, it was hard I have to admit. I was really beat up at the end of the competition. I watched the video when they announced I won and I looked in shock but I was also really tired and ready to actually have a break from cooking! The final cook-off was against Rebecca. I have a real respect for her cooking and I love her passion for teaching people about healthy food. She is a gem of a person and I hope we find a way to cook together in the future.

So I am the Twin Cities Live Kitchen Star! And what that means is that I won $2,000 in Cub groceries and I’ll be appearing on the show about once a month. It was truly a blast and like everything, without Will by my side, it just wouldn’t have been possible.