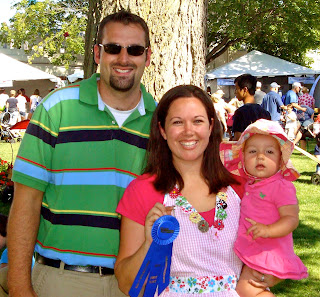 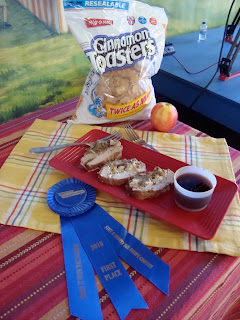 During the baking deadlines for the Minnesota State Fair, my husband questions my sanity at least once a day. Our tiny St. Paul kitchen gets filled to the brim daily with dirty dishes, pots and pans, measuring cups, spices, seasonings, pie crust trimmings and this year, pieces of Spam. Will and I have always had an agreement that if I cook, he cleans the kitchen afterwards, well during the state fair competitions, he gets the short end of the stick because not only do I make a huge mess, I take all the food to the fair to enter in competitions. Although truth be told, he does a lot of taste testing for me. This was my third year entering the Minnesota State Fair contests. The first year I won a third place ribbon for Green Eggs and Ham on a stick, last year I didn’t win anything (I was 8 months pregnant and not sure how I spent all that time in my hot kitchen and didn’t win a single thing) and then this year I was amazed to find out I won my first blue ribbon, for my Malt-o-Meal entry, French Toast Stuffed Pork.

When I was standing in line, I was talking to other bakers and heard their stories of 5am bedtime and nervous breakdowns on the kitchen floor and I felt reassured that they too faced challenges in the kitchen but persevered. The morning of the Malt-o-Meal turn in day I realized that I had cream cheese and apples in my recipe-two prohibited items. I sat there and asked myself out loud, “Are you crazy? What are you doing entering all these contests?” And I almost decided to go back to bed and not even turn in my dish that day because I was so mad I overlooked the fine print of the rules. Well I kicked myself in the butt, revamped my recipe and gave it my best.

I also had another funny experience in line, Marjorie Johnson walked by after dropping off her entries and I said, “Hi Marjorie, I’m Alice!” She responded, matter of factly, “I know who you are Alice, I’ve seen you on TV!” She is as nice as can be and we had a good time talking while I waited in line. I asked her how many ribbons she has won and straight-faced she said, “Well, I think about 2,700.” As I dropped my entry off, the table workers commented on the delicious smells and I thought that was a good sign. That night I got the call that I won the blue ribbon and Will and I jumped around our living room with Stella cheering and laughing. I couldn’t do any of this without Will and I am so thankful to have such a loving husband who supports me in all my crazy cooking adventures, cleans up all my dirty dishes and then at the end of the day is always my number one fan-blue ribbon or not.

If you want to make my original/prohibited ingredients version, add two chopped apples to the stuffing mixture and then after you rub the tenderloin, spread 8 ounces of cream cheese on the pork before filling with stuffing.