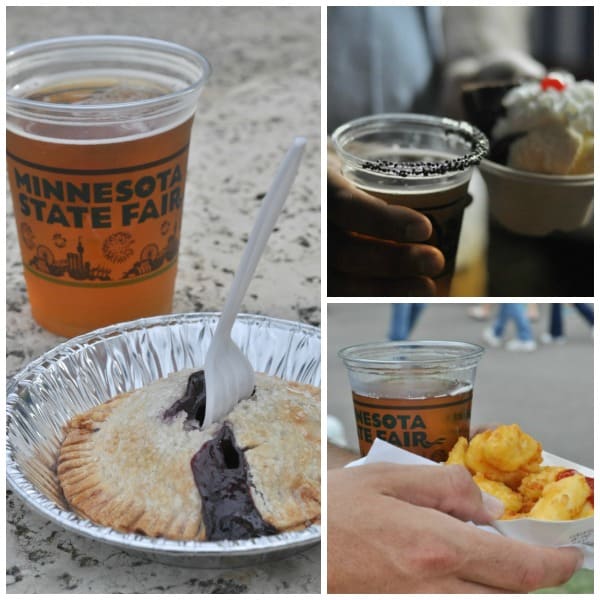 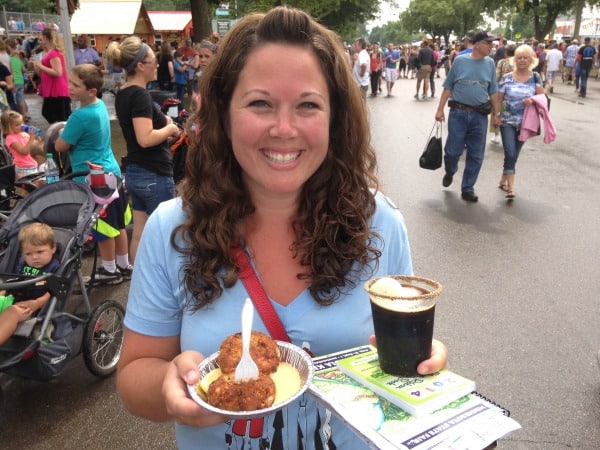 “This chocolate-infused campfire original features the Cygnus X-1 Porter, an old English recipe with a natural hint of chocolate, a touch of smoke and added rye malt. Each glass of S’mores Beer is rimmed with chocolate, dipped in crushed graham crackers, and topped off with a soft, fluffy marshmallow. 6.5% ABV. Brewed in St. Paul, Minn. by Flat Earth Brewing Co.”

In 2014, my first stop at the Minnesota State Fair was to Giggles’ Campfire Grill to drink the new S’mores beer and I’ve been making this stop every year since. I loved the porter’s smoky chocolate flavors and the chocolate graham rim. This is a great way to celebrate summer. Order your beer in the front and then walk to the back to enjoy a lumberjack show or hang out in their patio area and listening to music and enjoy their great craft beer selections. Also very important to note is that if you are visiting the fair with kids, Giggles has a Kids meal for $1.25. Yes, you read that right. Chicken fingers, fries and a cookie for $1.25. 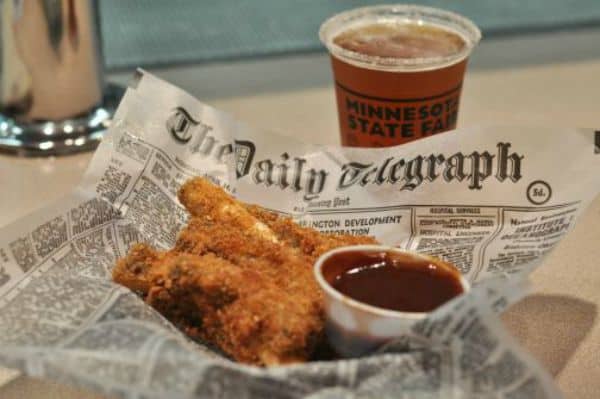 “This creative beer’s warm tan color, malty base and natural flavors are reminiscent of a fresh State Fair mini donut. This sweet, summer sipper has enough rich flavor not to overwhelm the palate. Each glass of Mini Donut Beer is served rimmed with cinnamon sugar to enhance the aromas. 5.0% ABV. Brewed in Stillwater, Minn. by Lift Bridge Brewing Co.”

When I think about the Minnesota State Fair, this beer is what I dream about. One of my very favorite beers of the State Fair, it is super drinkable and pairs perfectly with the Ball Park Cafe’s deep fried ribs and garlic fries. I love the malty and sweet flavors of the beer and the cinnamon sugar rimmed glass. Don’t miss this one. Pull up a chair at the Ball Park Cafe’s awesome patio, sit outside with your friends and family and take a moment to relax and enjoy this great beer and the many other great craft beers they have on tap. 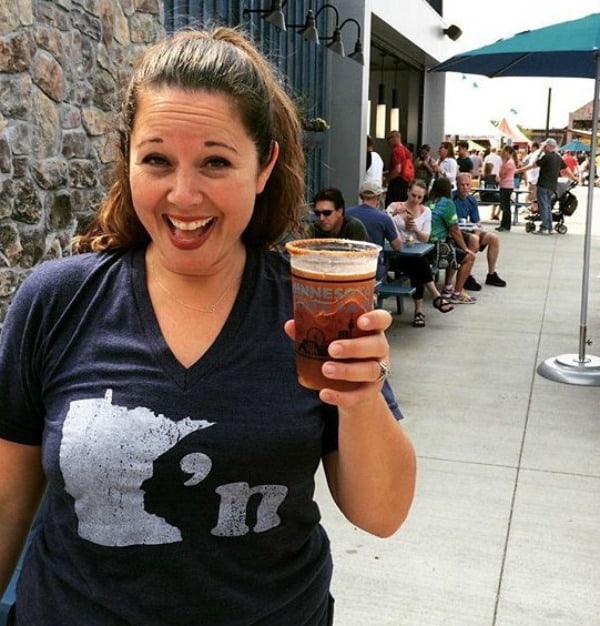 “This blend of apple cider with barley malts creates a warming caramel apple pie taste. This comfort cider-beer is light, fresh and flavorful, welcoming in Minnesota’s autumn season and apple harvest. 5.4% ABV. Brewed in Minneapolis, Minn. by The Freehouse.”

This beer was new in 2015, the Caramel Apple Pi beer is delicious and competitive, leaving Fairgoers contemplating whether they like the Pi or Mini Donut beer more. The Caramel Apple Pi is a serious contender for best special beer at the Fair and it is no surprise as it comes from the Blue Barn, known for their creative comfort food. This sweet and refreshing beer would be great with the Blue Barn’s new Spicy Pork Bowl. Pull up a picnic table, enjoy some creative spins on Minnesota comfort food and sip this refreshing apple beer.

Available at The Blue Barn at West End Market, south of the History & Heritage Center.

“The Radler-style Grain Belt Blu is a summery, refreshing and delightfully subtle twist on the classic Grain Belt Premium American lager. The familiar Premium beer is blended with freshly juiced blueberries for a light and crisp taste without any syrupy consequences. Make it a Frozen Blu by topping it with frozen Grain Belt Blu foam. 4.6% ABV. Brewed in New Ulm, Minn. by August Schell Brewing Co.”

A newbie to the Fair in 2014, the Blu and Frozen Blu were the Fair darlings in the newly constructed West End Market. The frozen beer was innovative and people are still impressed. When I was standing in line this year, a woman leaned over and said, “Have you tried the Frozen Blu? 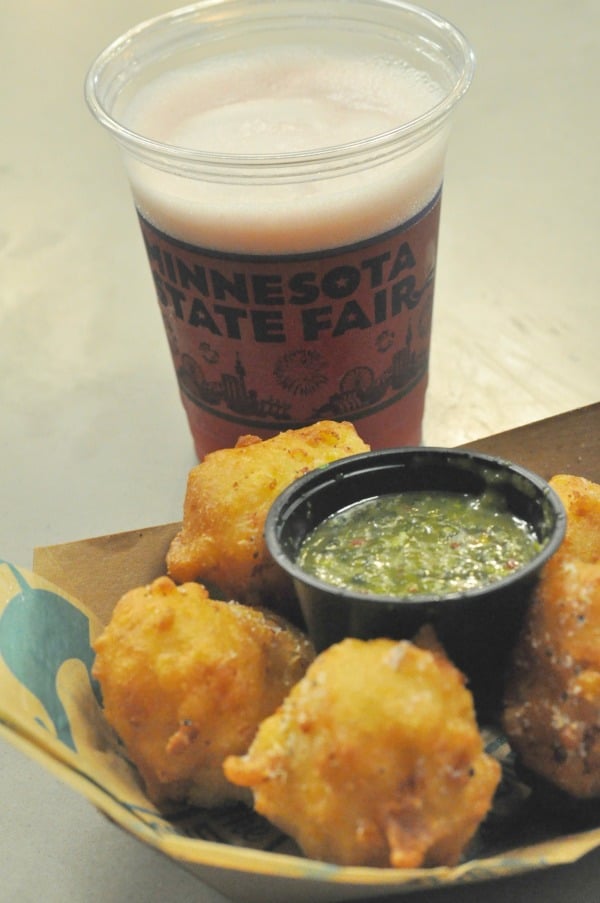 “Light and refreshing, this citrus lager epitomizes a carefree summer day and can be served as a standalone or as a frozen foam floated atop any of the beers served at the Schell’s Pavilion. 4.8% ABV. Brewed in New Ulm, Minn. by August Schell Brewing Co.”

New in 2016, this refreshing summer sipper isn’t too sweet and is the perfect beer to consume on a hot fair day. I had mine served with a bit of the frozen foam on the top. I love this new addition to the frozen beers and think it’s a great beer to enjoy with the Blue Barn’s Blue Cheese Corn Fritz (also available in the West End Market). The saltiness of the corn fritters is a perfect match for the red citrus flavors in the red sangria beer.

Both the Grain Belt Blu and Red Citrus Sangria Beer are available at the Schell’s Pavilion at West End Market, south of Schilling Amphitheater 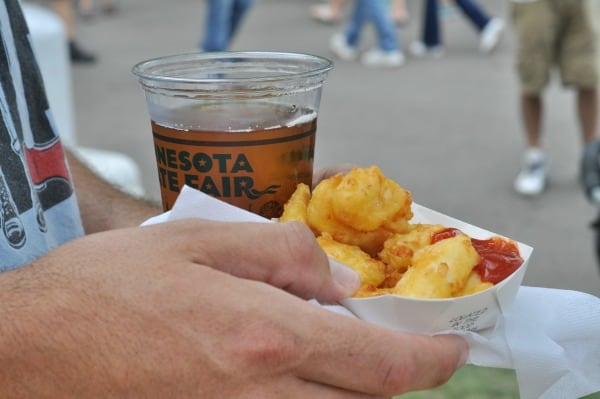 For those wanting to try a Minnesota State Fair beer that is a perfectly drinkable summer beer with a light sweetness of corn, this Sweet Corn Summer Ale is for you. No frills, just a summer beer perfect for pairing with some salty cheese curds (my favorite are from the Food Building). Grab a chair at O’Gara’s because it’s a great place to hang out and listen to music or relax on their patio. I’m also a big fan of their Reuben Bites.

Available at O’Gara’s at the Fair, located on the southwest corner of Dan Patch Avenue and Cosgrove Street 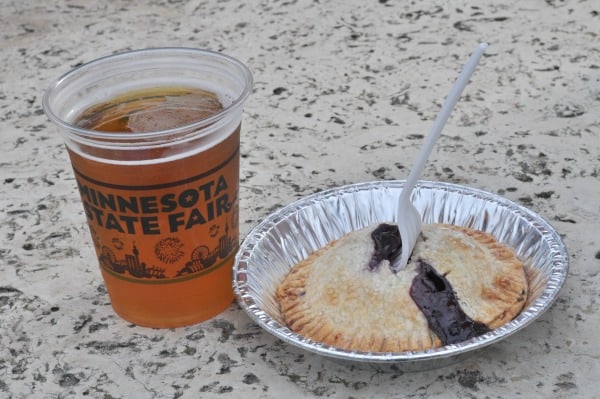 “This summer sipper puts a new spin on an old brunch favorite. Combining the Bent Hop Golden IPA with a huge burst of orange aroma and flavor, the citrus infusion highlights a number of hops in the IPA with effervescence akin to champagne. Not just for brunch anymore, this “Hopmosa” can be enjoyed all day long. 6.2% ABV. 68 IBUs. Brewed in Duluth, Minn. by Bent Paddle Brewing Co.”

This is my favorite beer of 2016. It is a hoppy beer with pops of citrus and I love the tiny bubbles of effervescence they have created with this beer. I think this beer pairs perfectly with a Boozy Blueberry Lemon Pie from Sara’s Tipsy Pies just around the corner in the Food Building. The pie is baked with wild blueberries, lemon zest, cream, and a beautiful Rosé wine from Chateau Saint Croix. Pick up your pie and grab your Hopmosa and relax on the Ball Park Cafe’s great patio.

Available at Ball Park Cafe, on the east side of Underwood Street between Dan Patch and Carnes avenues, outside The Garden 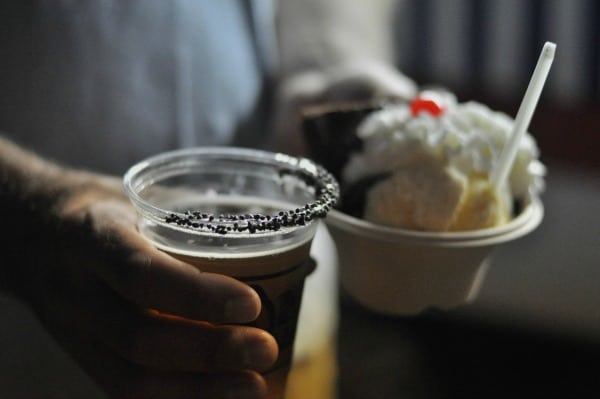 When I saw this new beer announced I was so excited. To me, the Minnesota State Fair is about really fun food, beer and activities. Totally unique and special, this Chocolate Chip Cookie beer is a perfect addition to the Minnesota State Fair beers. This malty golden ale has pops of chocolate and vanilla and the glass is rimmed with special chocolate chips that only melt in your mouth. This is a great beer to end your night at the Minnesota State Fair, while you could totally grab cookies to pair with this beer, I recommend walking around the corner and grabbing a Hot Fudge Brownie Sundae from Bridgeman’s Ice Cream, located at the Northeast corner of Judson Ave. & Liggett St. ($2.50 off one hot fudge brownie sundae in the Blue Ribbon Book) The sundae is chocolate brownie, vanilla ice cream, hot fudge, whipped cream and a cherry.

Available at Andy’s Grille, located on the south side of Carnes Avenue between Liggett and Nelson streets 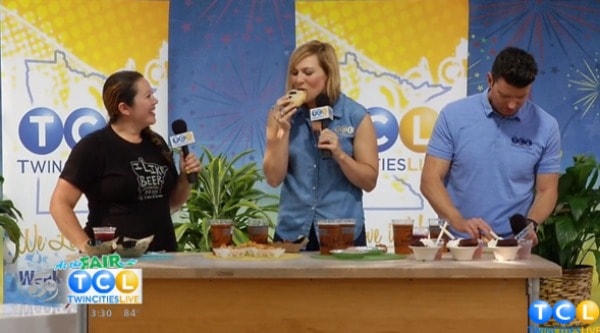 Enjoy these tasty beers and have a great time at the Minnesota State Fair! Tell me your favorites!