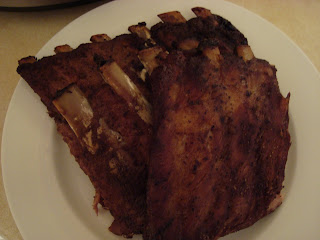 This recipe was created for the Twin Cities Live Cream of Mushroom Soup Chef Challenge-I came in a close second! This is a great recipe for the dead of winter when you need a grilling pick-me-up. The ribs get a great texture that is just like being on the grill. The wood chips help give off a smoky taste and the mushrooms give it an earthy flavor. You can find woodchips in the BBQ section of your local hardware store. There’s three ways to serve it and its a great recipe for Super Bowl!

Click here to watch the January 28, 2011 segment of Twin Cities Live when I made this recipe.

Directions
In a large bowl, soak 4 cups of Maple BBQ Smoked Chips in water for 30 minutes.

While chips are soaking, create the rub in a medium bowl-add brown sugar, cinnamon, salt and pepper, mix to combine.

Remove spare ribs from packaging and cut rack of ribs into two large pieces. Put ribs in a plastic bag or large bowl and add rub and coat ribs evenly on both sides.

Once chips have soaked, create the smoker packet by placing chips on one side of a 24 inch long sheet of foil. Fold over the other half of foil and seal edges, making a large pocket. Place smoker packet into bottom of crock pot and with a food scissors cut small holes throughout top of foil. Place ribs on top of the smoker packet.

In a medium bowl, add the beer and mushroom soup, whisk until well blended. Pour the mushroom-beer sauce over the ribs.

Close crock pot cover and cook on low for 8 hours.

Three Serving suggestions (serve with your favorite BBQ sauce if you like):

-As an appetizer-remove bones, chop meat and serve on top of squares of corn bread
-As a sandwich-remove bones, serve on Hawaiian Bread rolls
-As a main dish-serve on the bone with your favorite BBQ sides

Here is the recipe I made for the first challenge of the Twin Cities Live Kitchen Star contest. I originally came up with this recipe for a Malt O Meal cereal contest and altered it for the competition. This is a fun recipe for a pot luck. It gets people talking and having fun-who could … Continue reading →

With over 20 ingredients, this is a hearty and time consuming recipe but I would argue that it is totally worth it. I’ve used healthy ingredients and calculated the weight watchers points- a 2 cup serving is only 8 points! I get requests for this recipe all the time and people, including my family, can’t … Continue reading →