On August 29, 2012 I had the honor to cook with Marjorie Johnson on Twin Cities Live!  The show asked me to make my favorite blue-ribbon recipe and Marjorie Johnson would make her favorite blue-ribbon winning recipe and judges would pick the winner in the Ultimate Blue Ribbon Challenge.  Marjorie has won close to 3,000 blue ribbons in her career so she had many recipes to choose from, I on the other hand have only won 2 blue ribbons in my career! 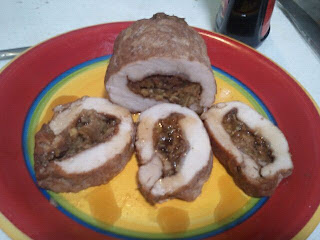 Needless to say, I was so nervous!! But I decided to make my French Toast Stuffed Pork.  It is a Burbon Maple glazed pork loin that is pounded flat and then stuffed with Malt o Meal Cinnamon Toasters cereal, stuffing and walnuts and then rubbed with brown sugar and cinnamon.  It is one of my favorite recipes!

As yummy as my French Toasted Stuffed Pork is, it couldn’t stand up to Marjorie’s Sour Cream Coffee Cake!  I lost by one point! It was such a fun segment and Marjorie is my baking role model, I just love her!  Click here to watch the August 29, 2012 Twin Cities Live segment when we made our recipes:
http://twincitieslive.com/article/stories/s2745726.shtml?cat=10698

Preheat oven to 375. Mix stuffing, Cinnamon Toasters, butter and water in a covered microwave safe dish.  Heat for 5 minutes.  Once done heating add walnuts and set aside. Remove pork tenderloin from package and cut lengthwise but do not go all the way through.  Pound tenderloin flat.  Mix brown sugar and cinnamon together.  Rub tenderloin with brown sugar and cinnamon mixture.  Stuff tenderloin with stuffing mixture.  Wrap aluminum foil tightly around tenderloin.  Wrap an additional layer of foil around tenderloin and bake in the oven on a cookie sheet for 1 hour. Remove from oven and let sit for 10 minutes then slice.  Serve with maple syrup.